The 39-year-old The Devil Wears Prada actress Rebecca Mader made the big reveal by posting a wedding shot on social media on Monday. She added the caption: “We are thrilled to announce that on the 23rd of Nov, Marc and I became Husband and Wife! We’re Married!”

The couple first announced its engagement on Christmas Day, 2014. Mader also appeared in TV drama Lost and currently portrays wicked witch Zelena in Once Upon a Time.

5-Move Cardio Workout You Can Do Anywhere 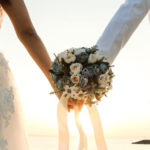 Tip to Color your Hair at Home