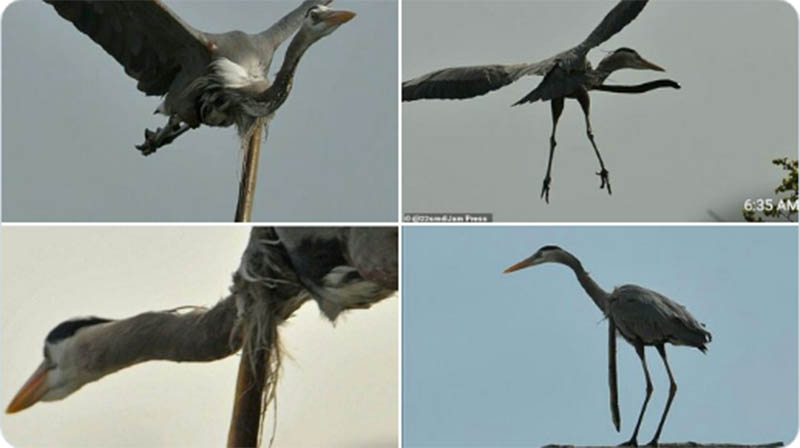 It’s hard to unsee this one.

A shocking photo captured by an amateur photographer in Delaware shows the exact moment that a snake eel bursts midair through the stomach of a heron that swallowed it whole.

The pic, which looks like something out of a sci-fi film, depicts the snake eel dangling while the heron continues to fly.

Got this on WhatsApp today.
A snake eel making a gruesome escape through the stomach wall of the heron, using it’s hard-pointed tail tip in a bid to escape digestion.
Captured on camera by amateur photographer Sam Davis. @contentbirder @Aps_nature pic.twitter.com/tOXBe1olWP

The photo was one in a set taken along the Delaware shore by Sam Davis, an engineer from Maryland, reports Live Science. While the moment was captured in 2011, Davis only uploaded the shots to a wildlife site a few months ago.

Davis told the outlet that the curiosity of nearby predators was piqued by the gruesome sight, with young eagles and foxes stalking the heron in case either of the animals in the photo didn’t make it.

He also said that the bird kept its cool, considering the circumstances.

“The heron didn’t seem to act much differently,” Davis told Live Science. “It was in the water and flying around.”

At first, Davis, who took the photo from 75 to 100 yard away, thought a snake had bitten and latched onto the bird’s neck.

It was only when he got home and zoomed in on the photos that he could make out what was actually happening.

“I could see the eel, you could see its eyes,” he said. “It was actually coming out the other end.”

What do experts make of the photo?

Pogonoski, who only saw the event in the photos taken by Davis, said it was a unique encounter that doesn’t happen often.

“I would think this is either very rare or very rarely seen in a bird species, at least as far as I am aware,” Pogonoski said.

Despite the gruesome quality of the photo, Pogonoski doesn’t rule out that the heron lived to snatch another snake eel.

“The heron possibly survived, it didn’t look too inconvenienced, but would depend on how well the wound healed and if it was able to avoid an infection,” he said.

The snake eel, on the other hand, “would only have survived if it was dropped over or very close to water with a salinity it could normally tolerate,” he added.

If You Notice These 4 Strange Symptoms, You May Have COVID, Study Says

How to Prevent Glasses From Fogging When You Wear a Mask, According to an MD Who’s Used This Trick for Years