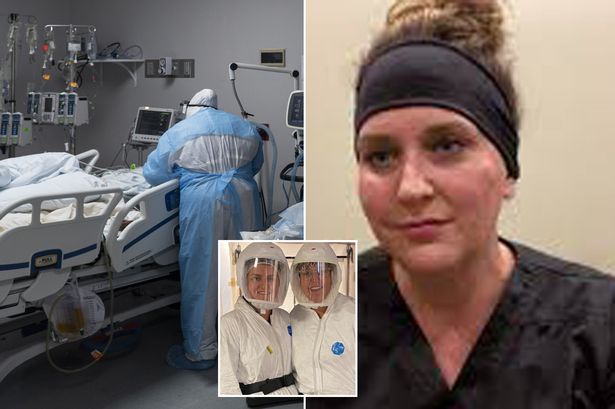 A nurse says some patients dying from Covid-19 still insist the disease is a hoax – even with their final breaths.

American Jodi Doering posted a powerful series of Tweets setting out the challenges medics face in a country where significant numbers of people claim the disease is a work of fiction.

The mum of two and ER nurse said Covid deniers are desperate to believe they have anything else, even lung cancer, than admit they have the virus.

And in some cases they choose to direct their anger at the staff trying to save their lives rather than speak to their own families while they still have the chance.

Jodi, from South Dakota, had such a response from her tweets that she appeared on CNN to elaborate on her heartbreaking experiences tackling the disease.

“Their last dying words are, ‘This can’t be happening. It’s not real.’ And when they should be… Facetiming their families, they’re filled with anger and hatred.” pic.twitter.com/tgUgP6znAT

She told the news channel’s presenter: “I think the hardest thing to watch is that people are still looking for something else and they want a magic answer, and they don’t want to believe that Covid is real.

“The reason I tweeted what I did was it wasn’t one particular patient it was a culmination of so many people, and their last dying words are “this can’t be happening, it’s not real”.

“When they should be spending time Facetiming their families they’re filled with anger and hatred and it just made me really sad. I just can’t believe that those are going to be their last thoughts and words.

“People look for anything. People want it to be influenza, they want it to be pneumonia, we’ve even had people say, ‘I think it might be lung cancer’, something so far fetched.

“The reality is since day one when covid started, if it walks like duck, it talks like a duck, its a duck.

“Even after the positive test results come back, some people still don’t believe it.”

It currently has the highest positive test rate in the US, in a country that has now had more than 11 million infections and nearly 250,000 deaths.

Critics have pointed out that the county Jodi lives in, Sanborn, has only seen one death from Covid-19 but it’s not clear which hospital in the state of South Dakota she works in.

Since appearing on CNN and posting her original tweets, the nurse says she has been sent death threats but won’t let that put her off from raising awareness.

In her original messages from Sunday, she wrote: “I have a night off from the hospital.

“As I’m on my couch with my dog I can’t help but think of the Covid patients the last few days.

“The ones that stick out are those who still don’t believe the virus is real.

“The ones who scream at you for a magic medicine and that Joe Biden is Going to ruin the USA.

“All while gasping for breath on 100% Vapotherm. They tell you there must be another reason they are sick.

“They call you names and ask why you have to wear all that “stuff” because they don’t have COViD because it’s not real.

“Yes. This really happens. And I can’t stop thinking about it.

“These people really think this isn’t going to happen to them. And then they stop yelling at you when they get intubated.

“It’s like a f**king horror movie that never ends. There’s no credits that roll. You just go back and do it all over again.”

After she received backlash for highlighting the reality of Covid patients who don’t accept what’s happening to them she added another series of defiant tweets.

“If people think 72 hours can’t change your life, they have never tweeted from the couch while eating ice cream,” she wrote.

“I debated on locking down my Twitter. You know, death threats and stuff. I have worried about the safety of my two strong, independent daughters. But if ever there was a time to set an example, it is now.

7 Tips: How to Lose Weight in Your Thighs

How to Treat High Cholesterol Without Medication

Get Your Metabolism Soaring in the Morning With These Tricks