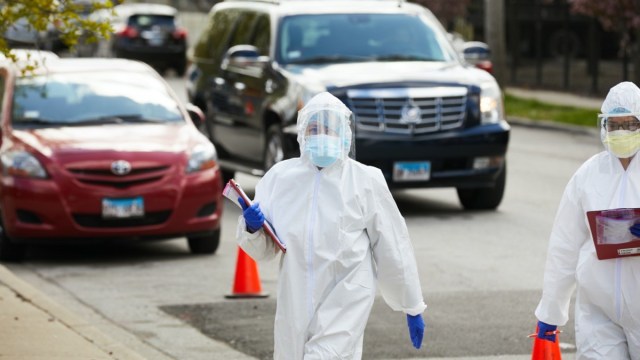 As predicted, the United States is currently in the midst of a COVID-19 crisis, with the number of infections, hospitalizations, and death toll increasing daily.

However, some states are faring worse than others in this latest surge of the virus, which has infected over 10.2 million Americans and robbed over 239,000 of their lives. While nobody wants another lockdown similar to the one in March, a few states are in trouble.

Here are 5 states that are heading in that direction. Read on to hear which states will be most affected, don’t miss these Sure Signs You’ve Already Had Coronavirus.

The state of Nebraska is currently experiencing a major surge of cases and hospitalizations. The amount of people hospitalized with COVID-19 has more than doubled in three weeks, with 794 currently taking up beds. On Friday the number of infections was 2,681 — with a whopping 3,276 added over the weekend.

As a result Gov. Pete Ricketts announced tightened restrictions, which will go in effect Wednesday at midnight. They include mask mandates at businesses when people are in close contact for 15 minutes, social distancing of 6 feet at gyms, bars, restaurants and churches, an occupancy reduction at indoor gatherings to 25% from 50%, and social distancing at restaurants and bars.

On Monday, Kentucky Gov. Andy Beshear revealed that his state was in”significant danger” from the virus, with a whopping 80 counties in the “red zone as cases, hospitalizations and deaths increase rapidly” and a test positivity rate of 7.5%.

“We are clearly at the worst place we have been for this disease,” Dr. Steven Stack, commissioner of the Kentucky Department for Public Health, said in a press release. “It took us almost 15 weeks from the start of this pandemic in Kentucky just to get to the number of cases we had last week alone.”

Utah has been adding 2,000 new daily COVID-19 infections to their tally, with their hospitals at the brink of capacity. Gov. Gary Herbert declared a state of emergency on Sunday, issuing a state mask mandate and other restrictions, begging residents “to do everything in your power to stop the spread of this disease.”

He also banned social gathering for the next two weeks, expanded testing, and suspended all high school and club sporting events as well as other “extracurricular activities.” However, playoff and championship games as well as intercollegiate sports are exempt. Businesses must also force employees to wear masks and encourage patrons to do the same. “Masks do not negatively affect our economy, and wearing them is the easiest way to slow the spread of the virus,” he said.

Texas, hit particularly hard over the summer, is facing a new COVID-19 crisis. Currently the state boasts a 10% positivity rate, and has more total cases than anywhere in the country, currently close to 1 million. In El Paso, the pandemic has gotten so out of hand with infections and hospitalizations on the rise, that the city is running out of room in their morgues.

County Judge Ricardo Samaniego recently had to request four more trailers — bringing the total to ten — to hold all the bodies. “It may be as much as 20 per day the next two to three weeks. There might be more and more an incline of deaths,” Samaniego told CNN affiliate KFOX. This comes just weeks after he ordered a two-week shutdown of nonessential services, proclaiming that the city had never experienced “this level of infections.” Elsewhere in the Lone Star state, cases are soaring at Texas A&M and many schools are switching to virtual platforms.

Wisconsin, sandwiched between the other troubled midwestern states Illinois and Minnesota, is breaking their own records in terms of hospitalizations and infections, with over 2,000 people seeking inpatient care as of Monday. The Milwaukee Journal Sentinel reports that this is an increase of over 350 in a single week and a staggering 560% increase over the last two months.

The state Department of Health Services on Monday also reported 4,360 new cases and 17 deaths, for a grand death toll of 2,329. Their average number of daily cases has been breaking records over and over for weeks, with their seven-day case average increasing by over 1,000 in a week — more than six times than it was just two months ago — and the third highest in the country. They also rank third in terms of the most daily cases in the nation. Democratic Gov. Tony Evers issued mask mandates over the last few months, and faced serious scrutiny and even legal action from conservative groups.

Millie Bobby Brown Is All Set To Play Princess Elodie In Netflix’s Next Plus There’s A Surprise!

The Connoisseurs of the British Museum