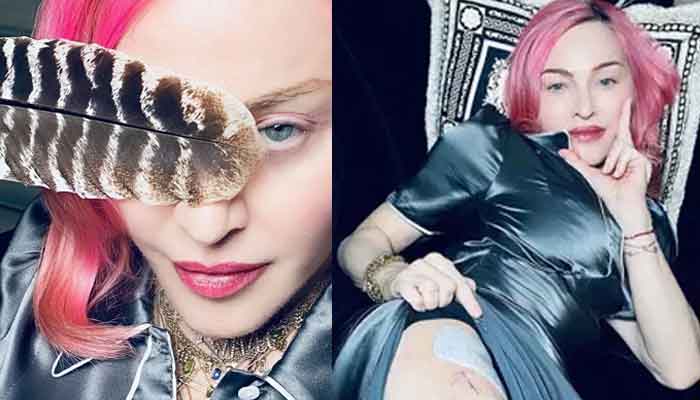 Madonna,  known as the Queen of Pop, opened up about her scar and bandage on right thigh, saying she was a survivor.

The 62-year-old singer took to her Instagram on Wednesday to reveal a scar and bandage on her right thigh, suggesting she may have had an operation to help with the ongoing issues.  Her 2019 tour was dogged by knee pain.

‘Madame X is a survivor #newmoon #miracles’, the music sensation wrote as she shared a photo of her with a feather over her eye and a video of her reading from a book.

Madonna’s world tour in 2019 was dogged by injury, with the entertainer having to cancel some of her dates due to ongoing issues with her knee.

Earlier in the summer, the singer  had been seen using crutches in the UK, including when she headed to a Black Lives Matter march, to show her support for the movement.

In May she also revealed she was having regenerative treatment for missing cartilage which was part of what was causing her pain.

The pop star wrote: ‘Finally going to get my regenerative treatment for my missing cartilage!!

She added: ‘I would be jumping up and down if I could after 8 months of being in pain. Wish me luck!’.

The queen of pop had also revealed the extensive rehabilitation she was having after being forced to cancel several of her tour dates prior to the coronavirus cancellation putting the rest on hold.

Madonna explained: ‘It’s a miracle I have gotten this far but a-lot has to do with the fact that I do 6 hours of re-hab every day.’

Singer Normani: “Being A Black Woman, I Feel We’re So Multi-Faceted & Have So Much That We’re Capable Of”