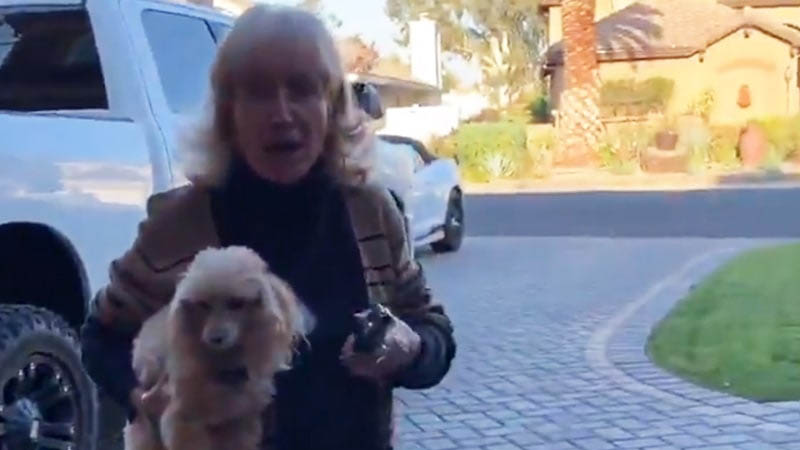 2020 is not over yet — and there may be a late contender for Karen of the Year.
A California woman armed with a Taser and a poodle told her Black neighbors they need to act more like white people.
The jaw-dropping confrontation was recorded by a Discovery Bay woman named Jariell on her security cameras, who also began recording on her phone when she saw the way the conversation was headed.
The woman stormed up to the family’s front door, dog and taser in hand, to confront them, claiming their pit bull had attacked her dog.
“Why are you so nasty?” she asks Jariell’s brother, before telling him: “You know what? You are a Black person in a white neighborhood, and you’re acting like one. Why don’t you act like a white person in a white neighborhood?”
Despite telling her that her racist rants are on camera and politely asking to her leave, she goes on to double, triple and indeed quadruple down on her stance.
When Jariell herself arrives at the porch, the woman insists the dog came after hers… which the earlier footage tacked on to the Twitter post seems to prove is untrue; it shows the woman crouching down and petting the pit bull, and even calling it a “good dog”.

“You know what? You guys are acting like Black people when you shouldn’t, you should act like white people,” she declares.

Incensed, Jariell asks her to repeat what she just said, and thus comes the justification.

“I was raised in Oklahoma City, where there were tons of Black people,” she explains. “You’re acting like people… that aren’t normal.”

She then gets right in the homeowners’ faces, announcing: “You know I have a top secret clearance?” before finally walking away… but then comes back for another round.

Displaying infinite patience, the man again tells her he has her on camera petting the dog that supposedly attacked her clearly uninjured poodle.
“I didn’t pet the dog,” she denies, but then adds: “I pet the dog because I wanted to see if he was okay.”
She then switches to threats, of both eternal damnation and financial ruin.
“You know where you’re gonna go? You’re gonna go to Hell,” she warns. “Because I’m going to sue the hell out of you. Both of you.”
Also now recording, the man announces: “Let’s show the world who has class and who doesn’t,” to which she breathtakingly replies: “That’s a good idea.”
“I have a top secret clearance, you know what’s going to happen to you guys?” she open-endedly threatens once again, before getting distracted by the arrival of another female from the house, whom she asks: “Are you white? Well you look like you’re white… I was raised with Black people and they were very nice in other places…”
“Keep digging your hole, Karen,” they tell her.
“I am TIRED of living this way,” Jariell wrote in her Twitter post. “I am TIRED of passive aggressiveness. I am TIRED of the fake smiles. I am TIRED that I don’t feel safe in a house that I’ve lived in for 10+ years cause of the color of my skin”, tagging it #karensgonewild #blm #racisminamerica.
When one Twitter user accused her of acting like “one crazy white lady off her rocker” was representative of everyone, Jariell clapped back: “Do you live in my skin? Do you know what I deal with everyday as a black woman? No. So stfu.”

Do you live in my skin? Do you know what I deal with everyday as a black woman? No. So stfu https://t.co/9aeuh9Ofbl

Nigella Lawson: The Most Beautiful Chef