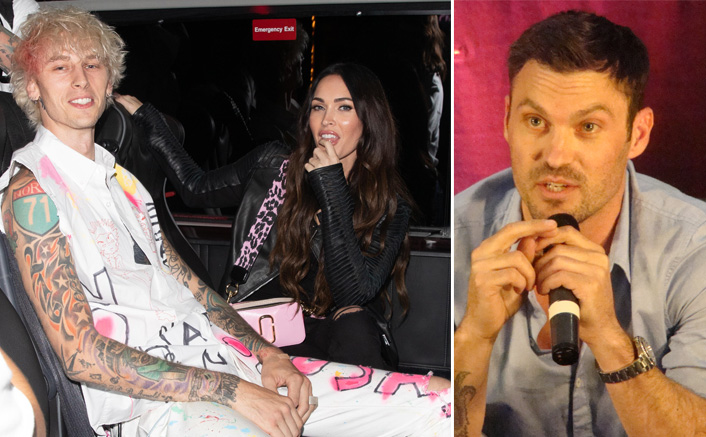 Megan Fox is currently enjoying the best phase of her life with Machine Gun Kelly. Both of them keep painting the town red with their romance. And it is evident that they are very happy and content with each other.

Well, Megan never shies away from expressing her love and affection for MGK and vice-versa. But this time she went on to say that her relationship with MGK is the best she’s ever had. Continue reading further to know exactly she has to say.

According to Hollywood Life, Megan Fox has called her romance with Machine Gun Kelly a once in a lifetime thing and said they have a connection of mythic proportions. “Loving him is like being in love with a tsunami or a forest fire,” Megan went on to explain, and the portal noted she was “laughing” as she said this.

Megan Fox continued, “The intensity of merging with him is just overwhelming, and the threat it poses is so powerful but so beautiful that you have no choice to surrender with reverence and with gratitude.”

The Jennifer’s Body star recalled the moment MGK had stolen her heart. It happened while they both found themselves in the same room on the set of Midnight in the Switchgrass, a crime thriller, that Megan and MGK are both starring in.

The movie began shooting in Puerto Rico in March of 2020, but the COVID-19 pandemic forced the crew to postpone filming; it resumed in July but was halted again in September after two film crew members tested positive for COVID-19.

“I looked into his eyes [and] I felt the most pristine, most gentle, most pure spirit. My heart shattered immediately, and I just knew that I was fu–ed,” Megan Fox recalled while reminiscing on that fateful moment on the movie set.

Machine Gun Kelly shared a similar story. “I didn’t know what [love] was until me and [Megan] made eye contact…That’s when I was like, ‘Whoa’.” The music artist, whose real name is Colson Baker, confirmed that he did “did fall in love for the first time.”

Interestingly Megan’s interview has come out just three weeks after she publicly criticized her ex-husband Brian Green Austin for posting a Halloween photo with their 4-year-old son Journey. Well, is she indirectly trying to shade Brian? What do you think?

How to Fix a Bad Haircut?