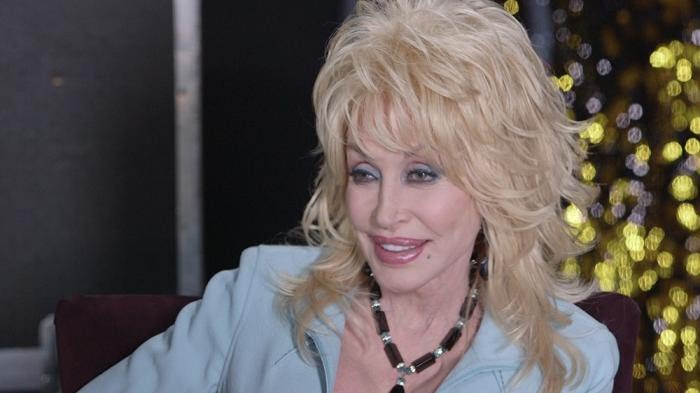 Despite her small stature, Dolly Parton has always been larger than life. We aren’t just talking about her huge amount of talent — she is usually sporting one of her iconic wigs, which literally add a few inches to her height. Think about it: have you ever seen her without one of them? Well in a recent interview, she revealed how she looks when she finally takes off the artificial locks.

“I don’t always wear [wigs] in my daily life, but I always still pouf up my hair,” Parton told Elle magazine for their Women In Hollywood issue. “I still like to have that flashy hair. When I’m around home, I wear my little scrunchies, but I always put on some makeup and fix my own hair as cute as I can fix it.

Wigs are just so handy. I’m so busy, and I have so many choices. I never have a bad hair day, and that’s a good thing.” Can you imagine bumping into Parton at a grocery store with her hair only held up by a scrunchie? We’re not sure we’d be able to recognize her — especially if she toned down her makeup and didn’t wear a single rhinestone, although that’s just as difficult to imagine.

The closest glimpse most of us will ever get to seeing her “dressed down” like that is this throwback shot of she shared on Instagram.

She could be wearing a wig in the photo, but it looks more like she added volume with some good old-fashioned backcombing to us. Either way, it’s the most natural style we’ve ever seen on her.

But as sweet as she looks in the photo, Parton just isn’t the same spitfire we all love without her signature look. It was something she had to fight hard for in an industry that already wasn’t very welcoming to women, especially not ones so hyper-feminine.

Parton admitted that her friend and mentor, Chet Atkins, once tried to convince her to change her style to be taken more seriously while she was getting her career started in Nashville. “I said, ‘You know what? I can’t separate the two.

This is who I am.’ I not only didn’t tone it down, I figured if my work was truly good enough, people would eventually recognize that,” she explained. We’re certainly glad the country queen stayed true to herself rather than let anyone change her.

“It was about me knowing who I was, being happy with me, and feeling comfortable in the way I presented myself. If I was happy, I could make other people happy.” There’s no denying Parton has made countless fans happy with her music and film roles — and those fabulous wigs!

‘Vulnerable’ girl, 16, killed by aunt’s husband in ‘murder which had a sexual motive’

Stevie Nicks: Beauty and the Beast